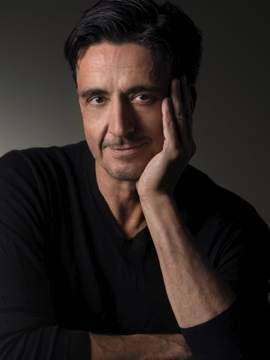 He has also released in the 80’s and 90’s several recordings such as REST YOUR LOVE ON ME, BARCAROLE VOM ABSCHIED (ARIOLA-Sony), WENN ICH TRAEUME (FABSCOTS Music) BRING HIM HOME (from Les Miserables Duett with Leon van Leeuwenberg- FABSCOTS Music)

After an inspiring journey and relocation to mystical Scotland, Ferdinand started work in 2008 on his album LIEBE TRAEGT DICH UEBER JEDEN OZEAN, which was successfully released in 2010! It was surely fate that he met Rosemarie Gura, a gifted composer and writer from Austria who inspired him through her powerful lyrics and her strength in writing music to go back to the recording studio and to produce and sing 7 tracks from her. Other songs on the album that mean a lot to Ferdinand are LOVE CHANGES EVERYTHING from Andrew Lloyd-Webber, WHO I WAS BORN TO BE and EVERY FLOWER NEEDS THE SUNSHINE, the haunting melody from the successful Swedish film AS IN HEAVEN where he rewrote the lyrics in both English and German.

In the meantime his music has started to reach people all over the world (over 52000 „likes“ at facebook, over 2.1 mio. hits at his FERDINANDRENNIE1 YOUTUBE CHANNEL ). Ferdinand reached 2012 German Airplay Charts with his song release ALLES LIEBE ODER WAS and he also released 4 wonderful Christmas songs “ iT’S CHRISTMAS ALL OVER THE WORLD“ „STILLE NACHT, HEILIGE NACHT“ „WHITE CHRISTMAS“ „SILENT NIGHT, HOLY NIGHT“. He also recorded and produced the song DRYING LITTLE TEARS for the REGINE SIXT CHILDREN’S AID FOUNDATION.
His single release I LOOK TO THE HORIZON / NACHTS HOER ICH DICH LEISE WEINEN was especially written for Ferdinand by top Swedish Writers Edberger/Antblad.

After the successful, worldwide single releases of THE ANSWER TO EVERYTHING, SUMMER ROSES AND WINE, WAITING IN THE WINGS and in Germany – two new albums were released

2013 engl. album I WANNA WAKE UP WITH YOU german album SAG NIEMALS NIE.

Ferdinand released in September 2013 the Austrian/Bavarian Countrysong „MY JODL LADY“ in german and english Version.

With his song LEISE KLINGT DAS LIED DER SEHNSUCHT he was immediately able to place this at several online radiostations charts.

In the preXmas 2014 season he was touring as the duetpartner of worldstar , Eurovision Song Contest winner VICKY LEANDROS during her XmasTour of Germany and Austria.

In summer 2014 he released a modern, updated interpretation of Lara Fabian’s hitsingle – I WILL LOVE AGAIN and from James Morrion’s I WON’T LET YOU GO.

In February 2015 Ferdinand released his exciting version of the well loved song ANGEL (written by Sarah Mclachlan), both in english and german !

RUN was released 14/11/2015 – rarely has a song been interpreted with so much meaning and emotion.

His wonderful interpretation from the evergreen THE ROSE (in english and german) was released 8th march 2016 !

his recordings A STAR THAT SHINES FOR YOU and ICH BIN DEIN STERN were released at the end of 2016 !

MAY 2018 the new feel-good dance single FOREVER was released worldwide!

In summer  2019 Ferdinand released the ballad UP TO THE MOON,  which was written by British songwriter Andy Littlewood

Ferdinand’s  OUR LAND and his  first CHRISTMAS  album was released mid November 2019 !

In Summer 2020 he released the co-written ballad I SHOULD HAVE WRITTEN YOU A LOVE SONG and in autumn 2020 his own interpretation from the classic ballad YOU RAISE ME UP .

End of October 2020 the new original ballad ONLY GOD KNOWS was released.

The Album LOVE FOREVER was released November 2020 and is available everywhere !!

the original single ALL WILL BE GOOD – is released since October 2021!
ALLES WIRD GUT ! – the German version was released in October 2021

WITHOUT YOU -& YOU RAISE ME UP – uptempo version – was released December 2021
in January 2022 – the German Schlager Album -ALLES WIRD GUT! was released
and the single feel good song -KISSED BY AN ANGEL was released mid February 2022
in April 2022 he released CHASE THE SUN – produced by Grammy Winner MIKAL BLUE

April 16th 2022 Ferdinand performed at the ITV Show BRITAINS GOT TALENT !
the new uptempo mixes from KISSED BY AN ANGEL & MY ONE TRUE FRIEND were released in spring 2022